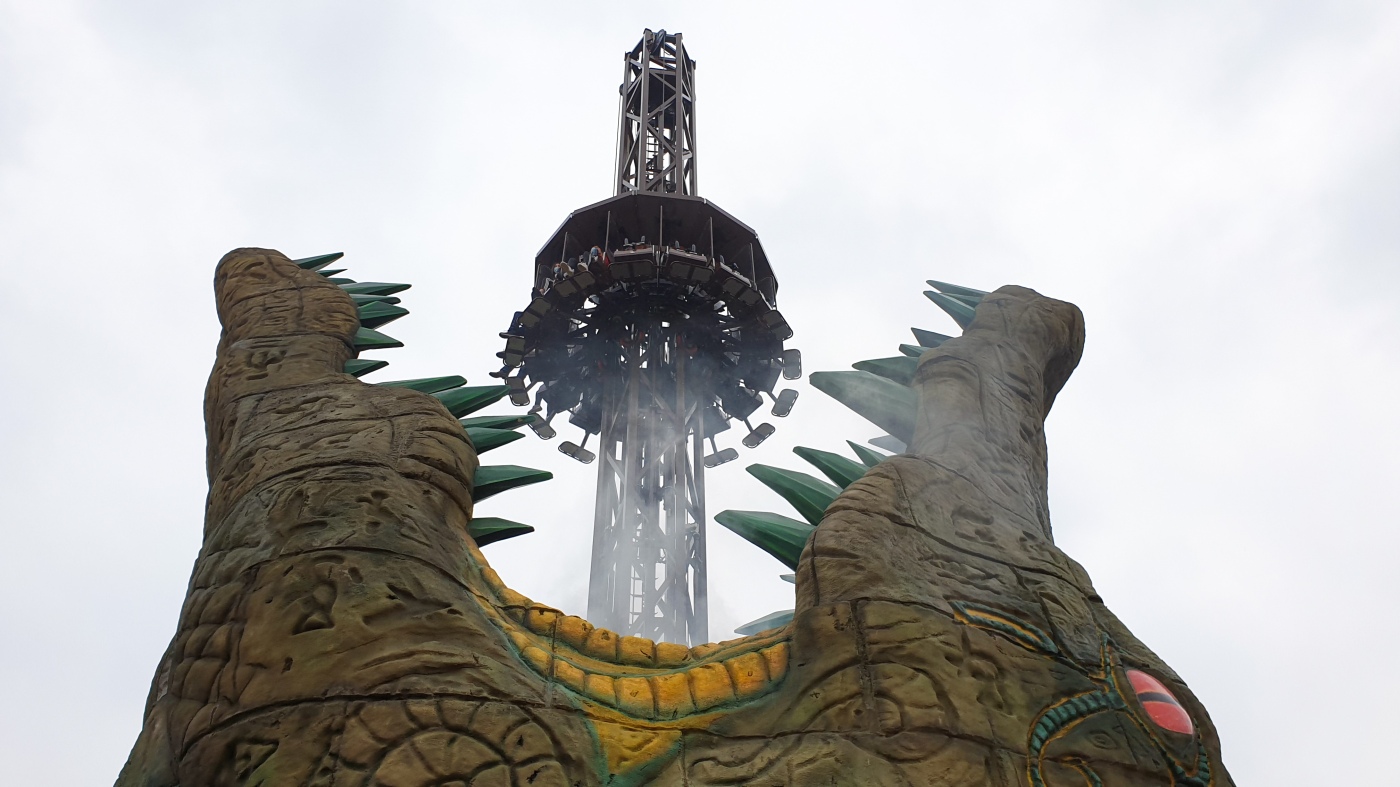 Last week I visited Chessington World of Adventures Resort for the first time since Summer 2019. Due to the ongoing pandemic, and various other reasons, I simply didn’t manage to make the journey south to visit the Resort in 2020, so I was curious to see the changes that had been made since my last trip and choose to book a mid-week trip in the hopes that things would be quieter, therefore allowing me to make the most of both the theme park and zoo.

The biggest addition since my last visit in 2019 is Croc Drop, the SBF Visa drop tower located in the location formerly occupied by Rameses Revenge. As you approach the ride it makes quite an impression as you see the giant crocodile mouth towering over the area with the drop tower itself emerging from the emerald toothed jaws. Around the ride there is a lot of attention to detail, from various items of theming dotted around the queue, Egyptian hieroglyphs engraved into some of the queue-line fencing, to the interior theming of the ride chamber itself – including light and mist effects as the ride sequence commences. Perhaps the one thing the ride lacks is the off-ride theatre – when compared to its predecessor, Rameses Revenge, it just doesn’t seem to have the same ability to draw in those who may be walking past. Whilst the ride itself isn’t the most thrilling experience, it is perfectly pitched for Chessington’s target market and provides an ideal stepping stone for younger guests to build up to experiencing the more intense drop towers.

Zero queues and lots of animals

Visiting on a weekday during term time meant that there were no queues for anything meaning I could not only walk on every ride we wanted to, but also take the day at a very relaxed pace and get to see the many animals which call the Resort home. It was good to see the organist in full working order again on Vampire, as well as general touch-ups and minor additions to the queue line area. Dragon’s Fury was running the best I have seen in a long time, and I had what was possibly the most intense amount of spinning I have ever had on that ride – quite possibly down to the fact that they loaded the ride so I was facing backwards as the car went up the lift hill. Mexicana has received a range of improvements including new theming set pieces, general paint touch ups, and bright banners as you enter and exit the area. Zufari has also received some TLC with a re-recorded on-board commentary, and the caves now featuring glow in the dark paintings – a marked improvement on some of my previous experiences where the cave sequence had simply been switched off.

One of the things I’ve always loved about Chessington is the animals. With the Resort being so quiet it meant there was plenty of time to get to see all of the zoo’s residents. The Amur Tigers were particularly active, partly helped by the fact it seemed to be feeding time just as we reached Land of the Tiger. Although you couldn’t feed them, the lorikeets of Lorikeet Lagoon were still happily flying around, although some decided it was perhaps a little too chilly and opted to stay inside but these could still be seen through the glass viewing windows. Over in Wanyama Village the zebra were the closest to the look out platform I’ve ever seen them, providing the perfect opportunity to get some great photos. It was good to see some new additions too, with the coati being particularly active. The only disappointment animal wise was not being able to see the capybara. Having been moved to a new enclosure in the Rainforest area of the Resort, which was added in 2020, there was no sign of the capybara, despite signs outside the enclosures indicating they should have been there. Hopefully they were just hiding from the on and off showers that happened throughout the day and I’ll get to see them on a future visit.

A key consideration I have for a day out anywhere is the Covid-19 safety measures that have been put in place. Chessington have implemented much of what has become standard practice over the last 12 months, with all guests having to pre-book their tickets, and temperature checks being conducted upon entry. All guests over 11 have to wear masks on the Resort’s rides and attractions, as well as in toilets, shops, and when ordering food inside (any food ordered has to be consumed outside in line with government guidelines at the time of visiting). Compliance with mask wearing was generally high, although there was the odd exception seen from both guests and staff where masks were not worn properly. Floor markings have been added both in ride queues, and in other areas where guests are likely to wait, such as by snack and food stands, to help aid with social distancing – on our visit the majority of guests did follow these with just the odd exception. Signage has also been added at queue line entrances asking people not to join the queue if the back of the line is at the entrance, whilst in other parts of the Resorts with narrower pathways guests are asked to make sure they keep to the left. Within queue lines, barriers have been installed in places where the queue snakes and would bring people closer together – the style of these barriers range from those which have clearly been built into the design of the queue as seen in the Croc Drop queue line, to more temporary solutions using plastic sheeting and even fence panels. Whilst it is good to see the Resort put these barriers in place, their addition is not always consistent with some queue lines having obvious areas without the barriers where it is clearly needed.

Overall, it was a very good day spent at Chessington World of Adventures Resort. Even with the rain showers being on and off all day, it didn’t spoil the enjoyment. With all the improvements, the theme park is looking the best it has in several years, and Croc Drop is a nice addition to the ride line-up. If you want a nice, relaxed visit, with little to no wait times for ride then I would definitely recommend a mid-week, term time visit.